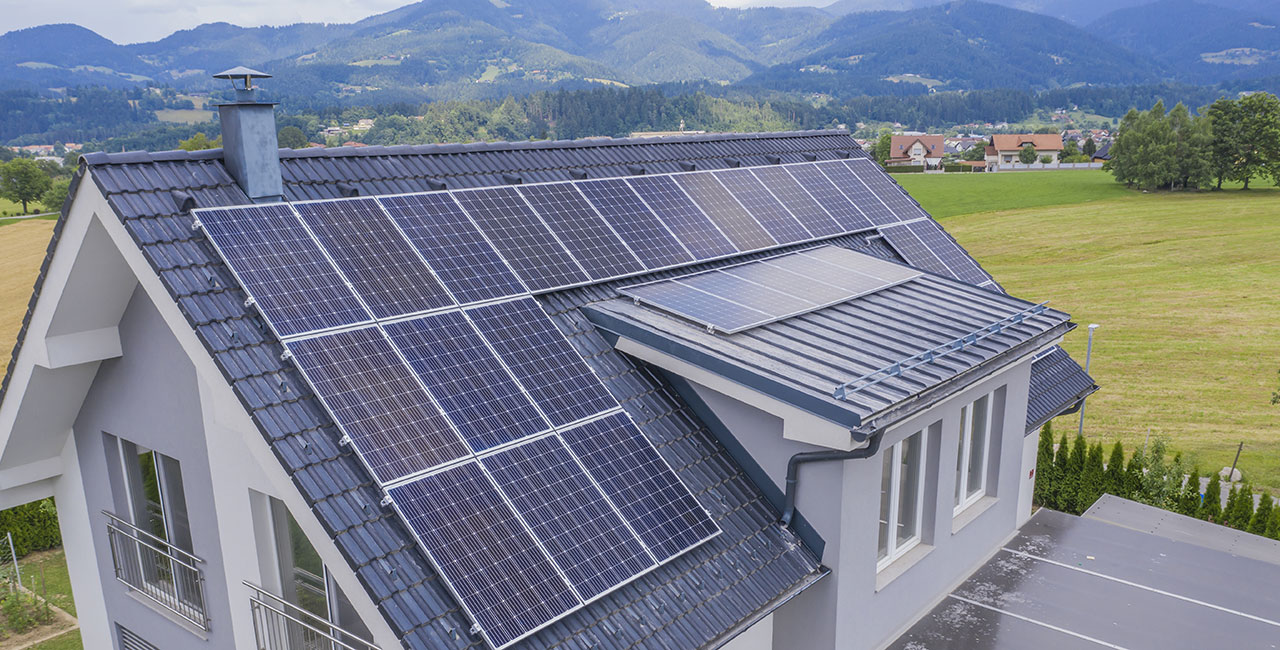 Deciding to put up a PV installation signifies a rethink. Whereas so far the electricity has been coming from the grid, it is now produced on your own property, much less expensive than the grid power. Therefore: Use as much of the solar electricity yourself and feed as little as possible back into the grid. We will show you how it is done.

THESE ARE THE 10 EXPERT TIPS TO USE SOLAR ELECTRICITY:

1. REDUCE THE ELECTRICITY CONSUMPTION OF THE BUILDING!

First of all: If you want to save on electricity costs – with or without PV – you should first eliminate devices and appliances that use too much of it. These include standby devices, incandescent light bulbs and water heaters. The lower your overall consumption, the greater the part of it that you will be able to cover using solar PV.

2. INSTALL LEDS INSTEAD OF LIGHT BULBS!

Usually the largest single cost factor is lighting. Obsolete light bulbs only use about ten percent of the electricity to make light. 90 percent are lost as heat. They produce heat rather than light, because they are based on a glowing filament made of tungsten. Modern LEDs use almost all of the electricity to make light. You can clearly notice this from the fact that they stay cool, i.e. there is much less loss. A good LED needs about a tenth of the electricity to produce the same amount of light. And because it does not heat up so much, it lasts much longer. And: The price of LEDs has come down so much, that exchanging them for regular light bulbs pays off within one or two years. The same is true for industrial lighting systems which often use mercury vapour lamps. These, too, use up a lot of electricity and can easily be replaced by LEDs.

Many electrical devices (kitchen appliances, TVs, computers, game consoles, HiFi systems) also consume electricity when they not in use and on standby. Considering the number of electrical devices in a normal house, the standby consumption can really add up. For that reason, such devices should – when not in use – be physically separated from the circuit by using switchable sockets.

If you are producing solar electricity, you should convert your hot water systems to electric boilers. Instantaneous water heaters also allow the heating of water close to the tap – for instance as under-sink units. The water temperature can be adjusted to exactly what is desired. The demand for hot water is more or less the same over the course of the year. During the late spring and summer, that demand can entirely be met by solar power. That increases the level of self-consumption. A combination with special hot water heat pumps can also make sense.

5. RUN HIGH-CONSUMPTION DEVICES DURING THE DAY!

Those appliances in the household with the highest electricity demand are the dish washer, the washing machine, the tumble dryer and the kitchen stove. These can easily be equipped with timer switches, so that they run during the day, when the solar generator on the roof is producing a lot of output, which can be used directly. A high-wattage stove might be a challenge for PV by itself. In this case, a large storage unit (solar battery) can be used as a buffer for short-term load peaks. Because it is not just the number of kilowatt hours on the roof that has to be sufficient, but also the currents made available at short notice. This determines if a storage unit is designed for capacity (in kilowatt hours) or output (in kilowatts).

6. DO YOUR GARDENING ON SOLAR ELECTRICITY!

Solar electricity yields are highest between spring and autumn. This is also the time of year when the garden requires the most work. You can very conveniently run electric lawn mowers, hedge trimmers or lighting off solar electricity. If you have a solar battery, you can use it to power LED lights in your garden in the evening and at night. A garden sauna can be heated up using surplus electricity during the day, so that it is ready for use in the evening.

7. HEAT ELECTRICALLY DURING THE TRANSITIONAL PERIODS!

If your solar generator is run in combination with a sufficiently large storage unit, you can use infrared radiators to take the chill out of cooler evenings. Such radiators come in a variety of nice designs, even in the form of bathroom heating mirrors. As long as they only use little power and are only used for additional heating, they are a good way to use up solar electricity. Once the electric heating from solar power no longer suffices, you will have to buy in electricity from the grid. Or you switch to a more efficient thermal heat pump system.

Between early 2014 and 2017, the price of stationary lithium batteries has fallen by more than 40 percent. This trend is expected to continue. Furthermore, the end of February saw the introduction of a new funding programme that will continue until 2018. These are good reasons for investing in a solar battery. What size to choose depends on the building’s electricity demand and the size of your solar generator. Lithium batteries currently cost about 1,000 euros per kilowatt hour, lead batteries about 500 to 600 euros (net prices for end customers). However: In a private residence, having a storage unit without a solar generator makes very little sense. This can be different for commercial enterprises.

Without energy storage, you can make good use of about 50 to 80 percent of the solar electricity for your own house. A battery can easily take that up to (almost) 100 percent. If you do not base the own consumption just on the solar generator, but on the electricity demand of the entire house, the following general rule applies: Without storage, you can meet about 30 to 50 percent your electricity demand directly from solar. In combination with a solar battery, this can be as much as 90 percent. To meet your entire electricity needs over the course of a year, you need a second generator, e.g. a cogeneration unit. It is usually simpler – and less expensive – to use the power grid. During the winter, your needs can be met through green electricity from a certified utility.

Almost as useful as solar batteries can be electric cars and vehicles – of any size. From the lawn mower to grandpa’s (or the friendly neighbour’s) electric wheel chair to pedelecs (e-bicycles) and e-scooters for the family. All of these contain lithium batteries which can conveniently be charged with solar electricity. Ultimately, there is the small electric car that can be used to go shopping, for short trips or to commute to work. For it is especially such frequent short trips that use up a lot of the fuel budget of conventional cars. To charge up an electric car, you need a wallbox charging point next to or inside your garage or in your carport. Which, of course, has been covered in high-performance solar panels. It is recommended to get a three-phase charging system capable of producing a decent output at short notice.

10. TREASURE HUNT FOR ALL YOUR FAMILY!

Experienced technicians can support you when it comes to consumption od solar electricity. It can be helpful to go step by step and check your metres to see what effect each measure is having. Finding the devices in your house which use up the most electricity can be like a treasure hunt, so make a game of it and let your kids go exploring. The money you save can be put aside and used to have a solar powered party with your neighbours. Or a holiday to where the sun shines! (HS/HCN).